The Giants did not have a chance to compete at Detweiller in Peoria last season due to the pandemic. This year, the team was unable to stay overnight, so adjustments were made to get the most out of only a one day trip. The HP team, as they have done throughout the pandemic, were ready to meet the challenges facing them and compete at a high level with no excuses. Awaiting them on Saturday was a long bus ride, rising temperatures throughout the day, and the largest and most competitive invite of the season. The coaches and team members were thrilled to have the opportunity to be back at the First To The Finish Invite to see how HP measures up against the best of Illinois and to run fast times!

The day for the Giants got started with the Open 3 Mile Race. This race had 933 finishers from both the 2A and 3A divisions. The top 6 finishers for HP were all sophomores! They were led by another personal best time for Nolan Schott with an 18:16.2. He just missed making the top 10 for the team and running in the varsity race with his usual pack of teammates. Schott made no excuses and was able to run the splits needed to improve his 3 mile time. 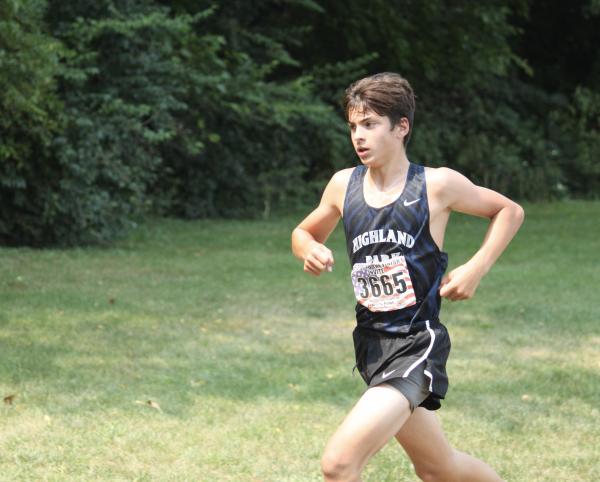 Eli Neiman continues to be running fast times as he inches closer to breaking 19 minutes. Here he finished in a personal best 19:02.3. His hard work this season continues to help his times drop. 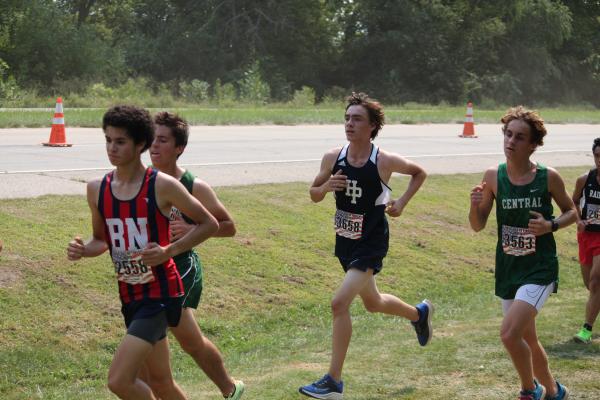 Zach Coren and Connor Edelstein worked together through 2 miles before Coren pulled away with a very strong final mile. Coren came through in a personal best 19:09.3. Edelstein battled tough and missed a personal best by a few seconds, running 19:34.6 with a bad blister to go along with it. Finishing just behind him was Ethan Love in 19:36.9. This was almost a 1 minute personal best! Andrew Kern worked well with Love up to 400 to go. At that point, Love pulled away with his sprinter speed from track. Kern still had a great race, running 19:44.6 with a 43 second improvement on his best time.

Next in for the team was senior Ted Zinox. His time was over a minute faster than what he ran at the EIU Showdown. He was followed by freshman Robby Mendoza and sophomore Eddy Picazo. Both had outstanding races. Mendoza was racing his first 3 mile race and came across the line in 20:56.2. Picazo finished in 20:58.5 which was a 26 second improvement from his time at Hinsdale. 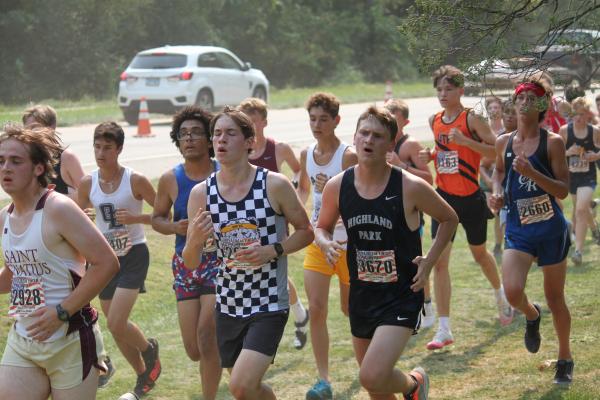 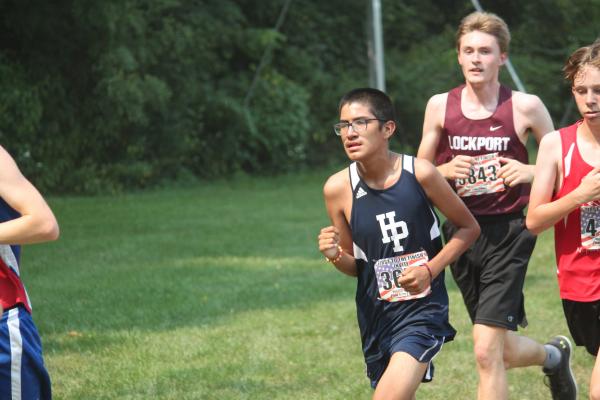 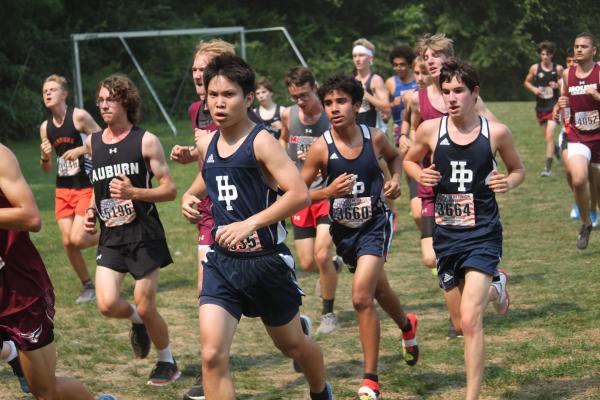 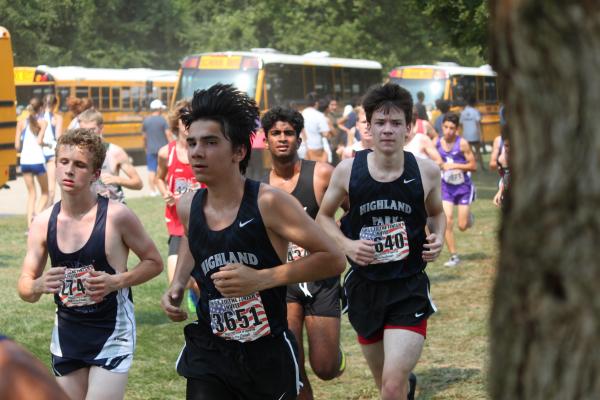 Freshman Mateo Diaz and junior Andrew Arzac raced well together throughout most of the race. Diaz continues to show improvement as ran a 23:32.1. Arzac ran a 23:39.5 in his first race back after having some leg issues last week. Freshman Brian Hatoum had an outstanding race and strong finish as he came across the line in 25:13.8. 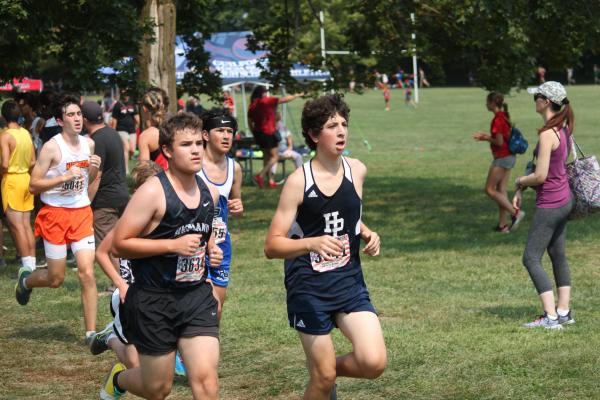 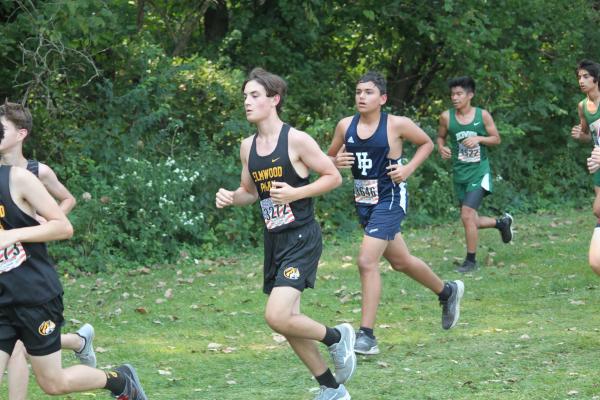 Freshman Mason Zoeller and sophomores Nate McDonagh and Ryan Griffith were near each other during the first portion of the race. As the race progressed they got spread out, but they each battled throughout the race. Zoeller came across in 29:54.6, McDonagh in 30:19.1, and Griffith in 30:52.1. As this trio continues to put in the miles of training and quality workouts, their times will drop significantly.

The Giants came in 23rd out of 56 teams with only 1 senior and 5 juniors in this group. The tough races run by these guys inspired the varsity to get out on the course and try to do the same.

All 10 HP runners competing in the varsity race got out fast for the first mile. Sophomore Nate Wehner led the way getting out with the lead pack and came through the mile in 4:50. After Wehner, the team then had basically two packs working together throughout the race.

Wehner tried to stay close to the top runners in the race which helped him get into great position after the back “triangle”. He fought hard to stay in the top 10 and ended up with a 9th place finish running 15:19.6. This is the fastest time ever run by an HPHS sophomore on Detweiller. This was an impressive race by Wehner and one which gives him confidence for the remainder of the season. 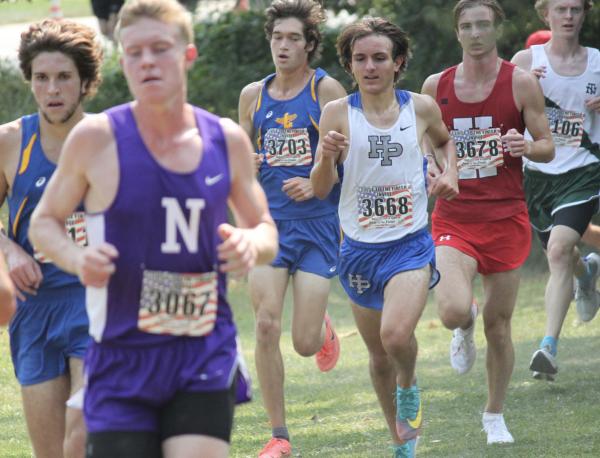 The pack after Wehner ran well and had some breakthrough races. Three juniors were the next finishers for HP. Noah Jackson had his best race of the season as he got out very well and held on to finish in 16:35.3. Next in was Alex Bradshaw with a 10 second personal best of 16:46.7. He struggled in the second mile but came back strong in the final mile and also had an impressive final 400. He was followed by Angel Zeferino who ran a 16:47.1 for his 3rd personal best in 3 races this season. Sophomore Barak Goldstein ran under 17 minutes for the first time with a 16:48.1 and had another meet with a strong final 400. Senior Alex Brown did not get out as well as his teammates in the first mile, but he never gave up and worked his way back into the pack to come across the line in 16:49.0. This group of runners was chased by freshman Carter Livermore. He ran an awesome race improving his 3 mile time of 18:30 from the EIU Showdown to an impressive 17:05.9. This was a huge breakthrough race for Livermore and really helps HP improve their top 7 gap that has gone from 2:59 to 2:30 to 1:46 in these first 3 meets. Livermore was also the 5th fastest freshman out of all the runners in the 3A Varsity and Open races! 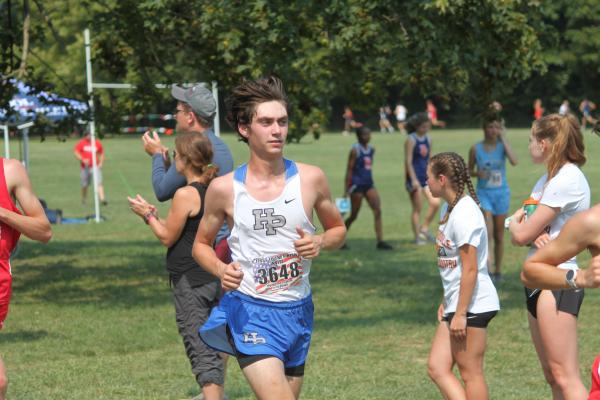 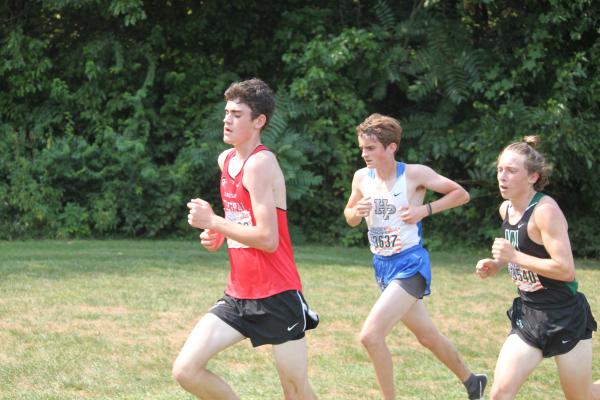 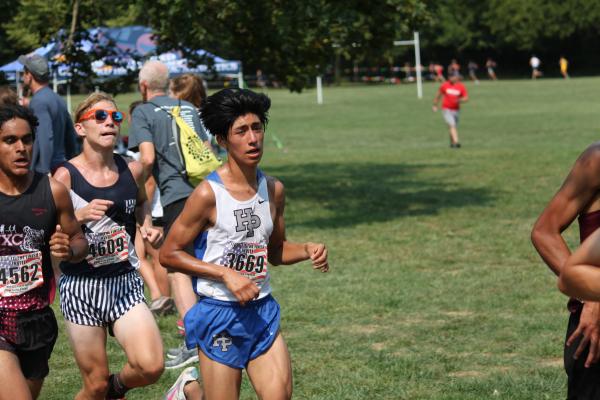 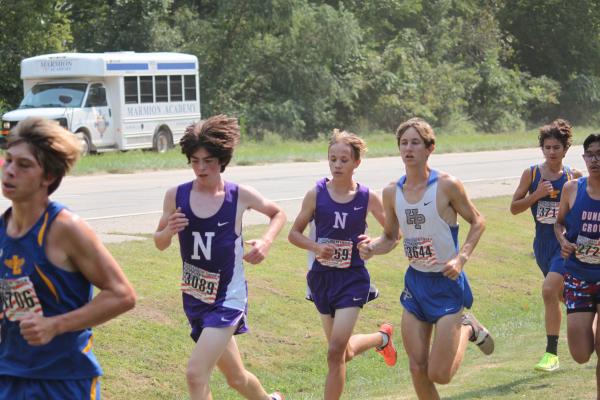 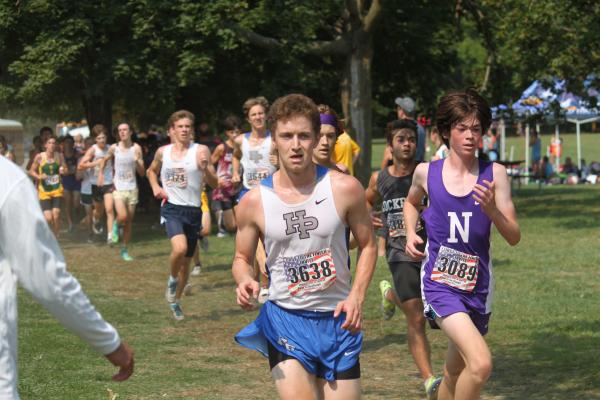 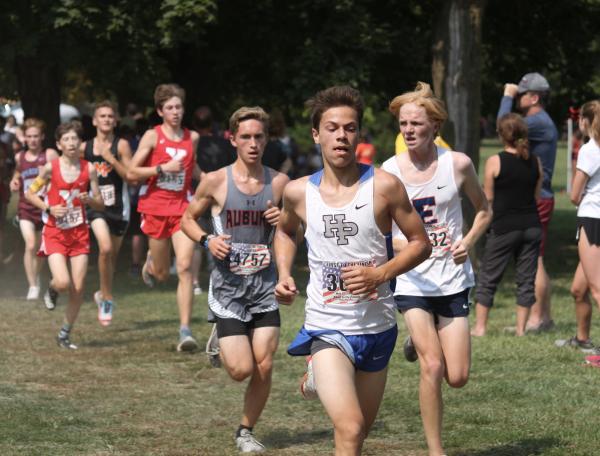 The next pack for HP consisted of 3 sophomores. Doug Anderson led the trio getting under 18 minutes for the first time this season with a 17:44.1. Yonatan Garfinkel also went sub 18 for the first time this season in 17:55.4. Lukaas Nales ran a personal best finishing in 18:03.4. This pack continues to push each other to get better and try to earn a spot in the top 7. 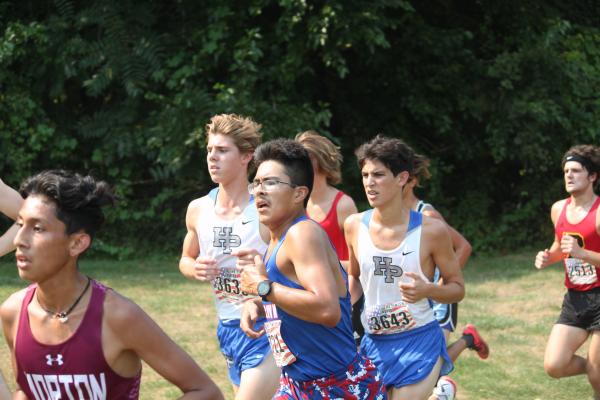 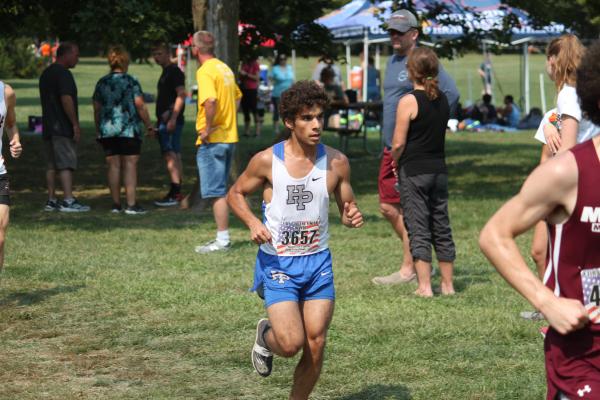 The varsity ended up finishing in 15th place out of 41 teams. The Giants hope to be in the top 10 next season and maybe even earn a top 5 team trophy. To do so, a commitment must be made by each runner to put in the mileage and training it takes to get to the elite level. HP has had teams that have accomplished that high level of success before. The coaches know what it takes to get there. Each team member will need to decide if they want to get there and will have to put in the necessary work (winter, track, and summer) to be ready for next fall with no excuses. 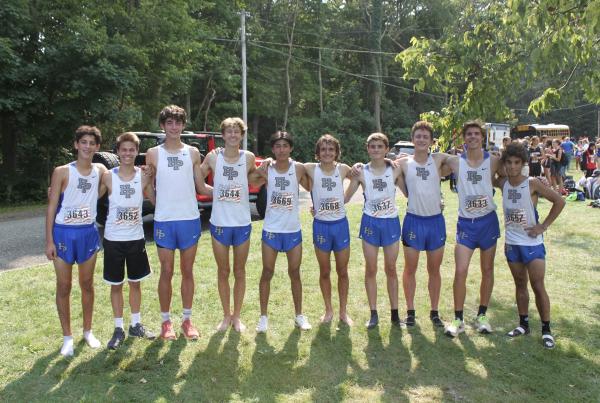