The New Trier Frosh-Soph Invite gives an opportunity for freshmen and sophomores to compete against their own grade levels. The meet included several strong programs that the Giants were ready to measure up against.

For this meet, HP did not have any freshmen throwers, but had two strong athletes competing at the  sophomore level. In the discus Dmitry Derbedyenyev took 2nd with a 106’5” throw while Larry Jenkins was 4th at 93’0”. Jenkins got his first over 40 foot throw with a 40’10” throw to take first place for the sophomores. Debedyenyev also got a personal best with a throw of 38’4” for 3rd place. 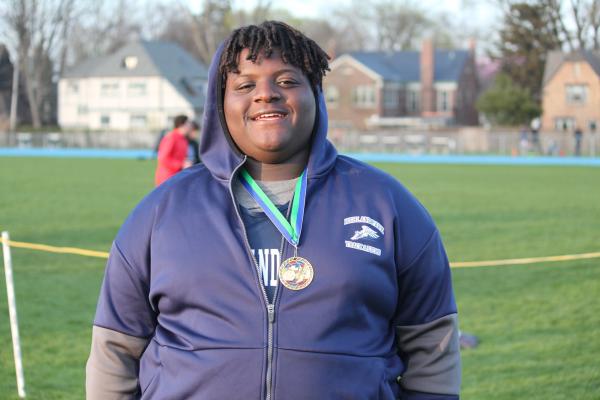 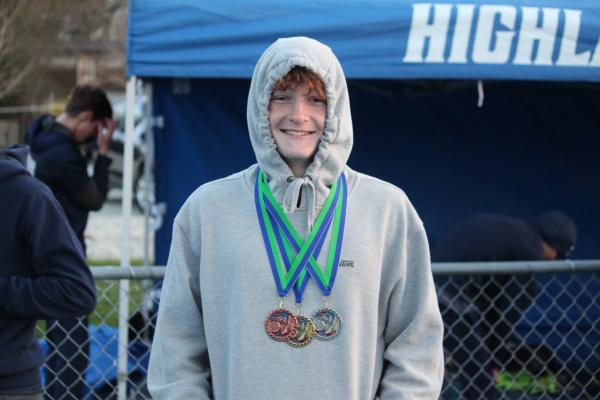 Dylan Dominguez took 4th for the freshman pole vault with an 8’0” clearance. 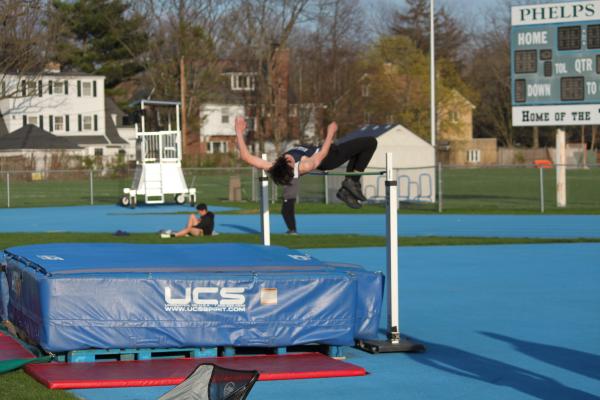 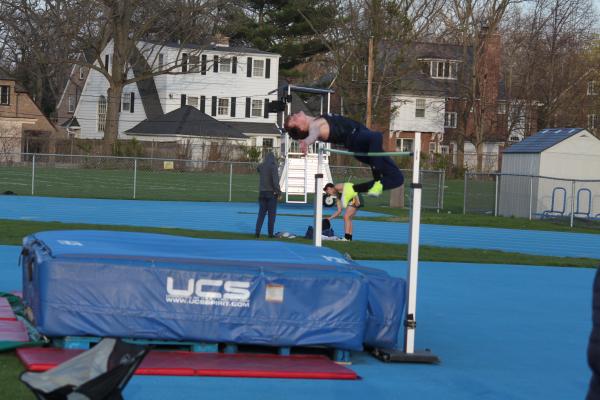 For the freshmen, Eli Perkins returned back to form from injury to take 3rd place with a 16’8.5” jump. Quentin Kelley took 5th place going 16’0.5”. In the sophomore competition Malachi Calliste won the event with a 19’4.25”. 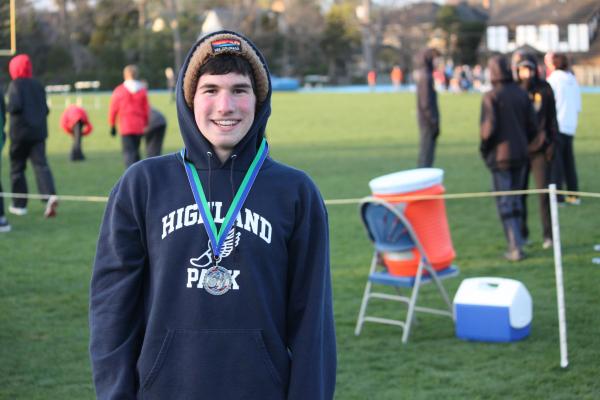 The field events gave HP an overall strong start for the team, especially on the sophomore level.

The first event on the track was the 4X800 meter relay. The HP freshmen had a solid performance taking 2nd place with each guy running near their personal best. The team included Usiel Rodriguez, Charlie Ludington, Robby Mendoza, and Brian Hatoum. They ran 9:59.24. The sophomores loaded up this event to go for both the meet record (8:35.65, 2017) and HP school sophomore record (8:21.94, 1977). They knew this would be a challenge and each guy needed to do his part. Zach Coren led things off with an aggressive start battling the leadoff leg from New Trier. Coren ran a 2:12.1 as he handed off to Doug Anderson. This first split was a bit slower than what Coren was shooting for, but kept the team in the range for the records. Anderson quickly pulled away from the competition and raced to a personal best 2:06.1 before handing off to Barak Goldstein. Goldstein attacked and pushed the pace to start lapping other teams and get to the line in 2:02.9 with Nate Wehner waiting to bring it home for the Giants. Wehner attacked as soon as he got the baton with a very aggressive first lap. He pushed himself down the final stretch with his teammates cheering him on to a 2:00.6 split! The team knew they got the meet record, but had to wait for the official time to see if they got the school sophomore record. The final time ended at 8:21.59! This broke both the meet and school sophomore records! 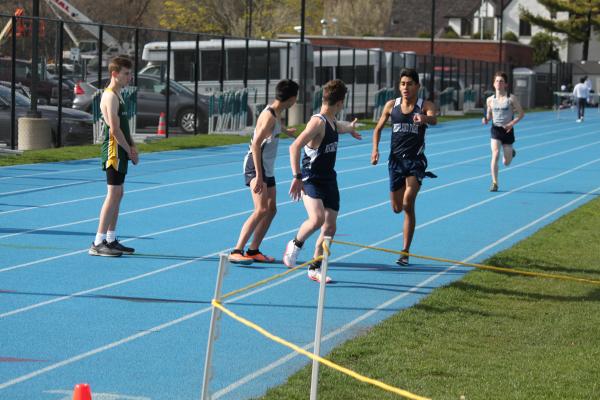 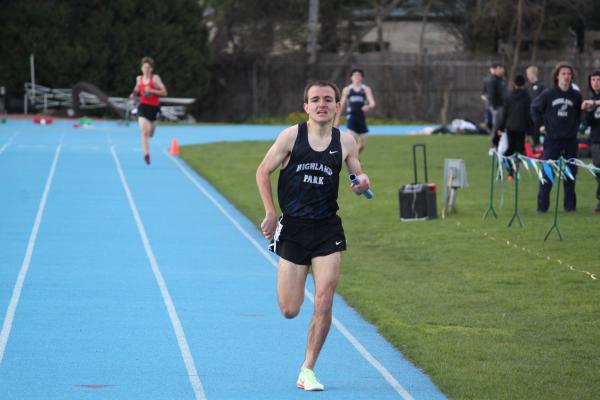 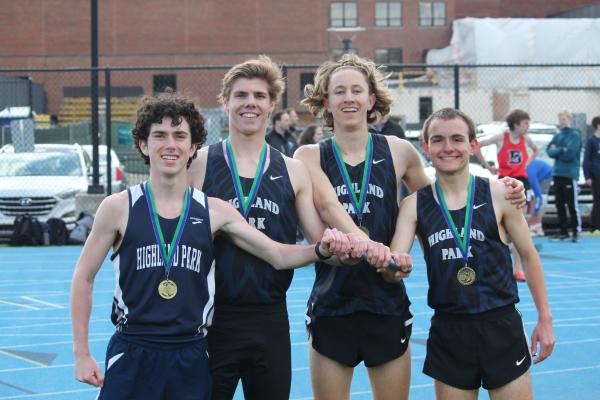 The next event on the track was the 4X100 meter relay. The HP freshmen team of Tyler DePaolo, Sam Kee, Dylan Dominguez, and Liam McKenzie ran a solid :49.12 for 3rd place. As this group of freshmen continues to clean up their handoffs, they will be running even faster. The sophomores were inspired by the 4X800 and also went after the meet record (:45.7, 2008) and the sophomore school record (:45.34, 2004). Calliste had his usual great start for the team and executed a good handoff with Oliver Baterdene. Baterdene ran well and had another good handoff, this time to Eddy Picazo. Picazo ran a great curve to get the baton to Lukaas Nales. Nales pulled away from the field and came across the line with a :45.51. They got the meet record, but just missed the sophomore school record by less than .2! 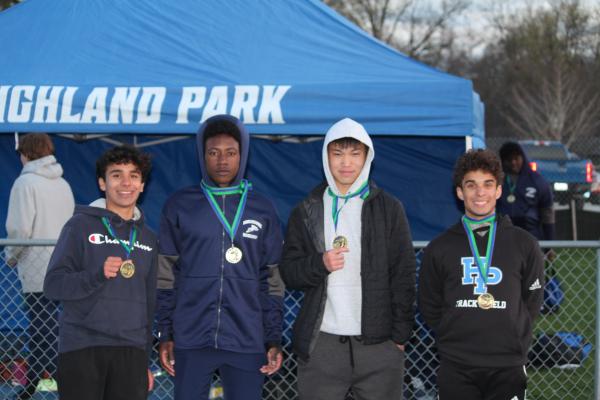 In the freshmen 3200 meter run, Carter Livermore took a risk and got out at a fast pace for the first mile chasing a runner from New Trier that went on to break the meet record. Livermore had a great race and finished his first 3200 of the season in an impressive 10:13.26 for 2nd place! For the sophomores, Nolan Schott ran a personal best 11:19.82. 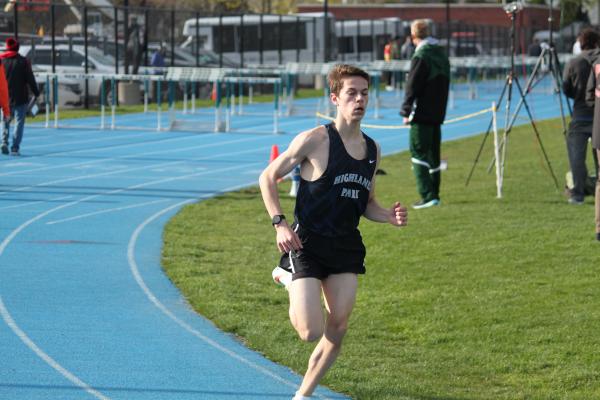 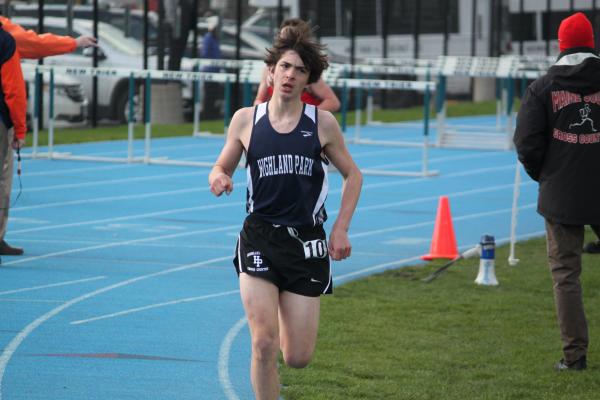 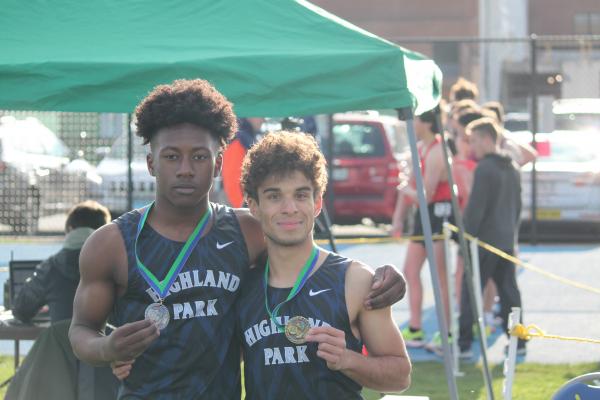 In the 800 meter run, freshman Brian Hatoum continued his aggressive risk taking racing and found himself in a tight race with two other runners coming down the final stretch. Hatoum put his toughness on display and showed that he just wanted it more and outkicked the others to take 1st place in a personal best 2:20.16. In the sophomore race, Connor Edelstein ran a personal best 2:16.64 to take 5th place. 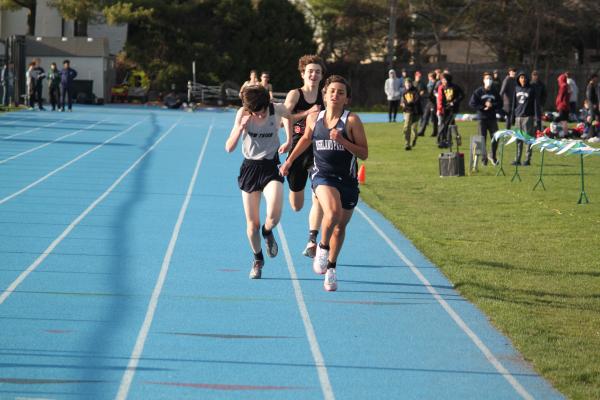 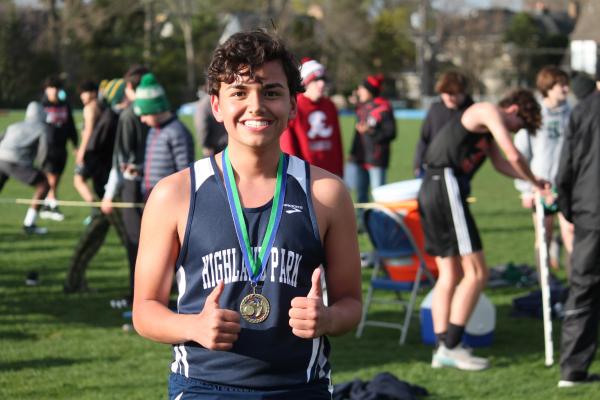 The freshmen 4X200 meter relay had an impressive race as they finished in 1st place with a time of 1:41.46. The team included Kelley, Kee, McKenzie, and DePaolo. The sophomore crew took 3rd place in 1:41.33. Their crew included Rosenthal, Zach Liss, Picazo, and Baterdene. 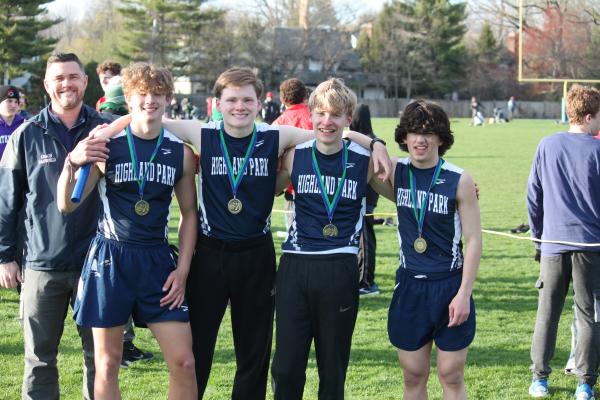 Dominguez won the 300 intermediate hurdles race, still being fairly new to hurdling. He won in :45.32. Baterdene took 3rd for the sophomores in :47.86. 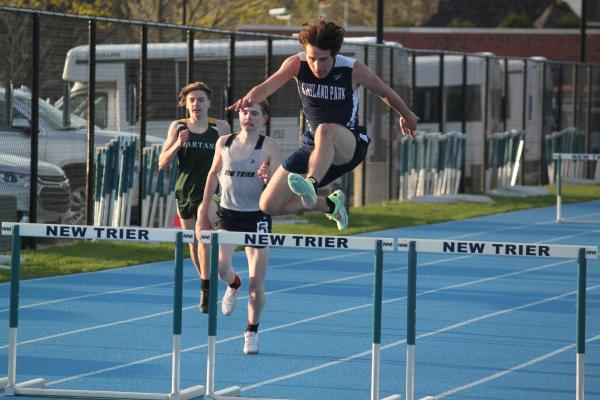 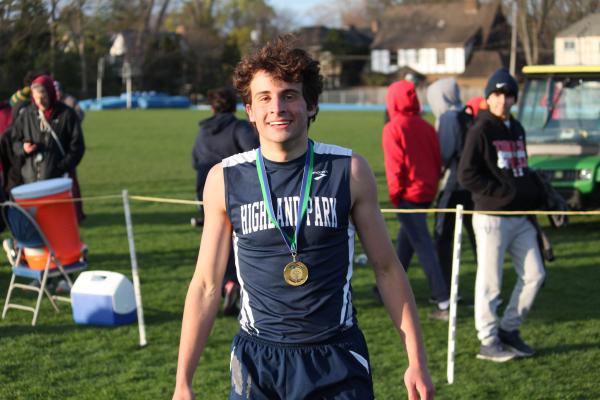 In the 1600 meter run, Livermore came back with a solid performance to run 4:55.79 for 2nd place while Rodriguez ran 5:14.98 to finish in 6th. Sophomores Wehner and Goldstein got out fast and pulled away from the field. Wehner worked to pace Goldstein to a fast time. They finished 1-2 with Wehner crossing the line in 4:40.51 and Goldstein in a personal best 4:41.22. 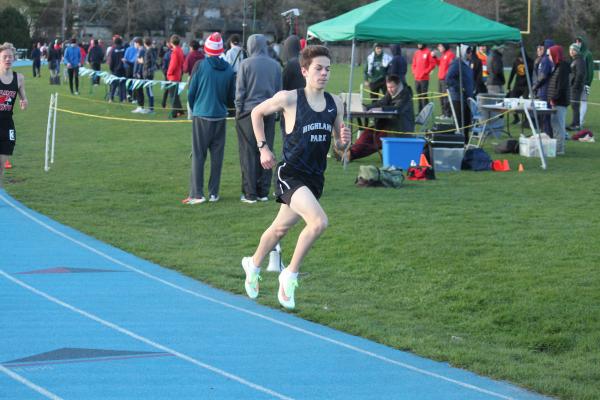 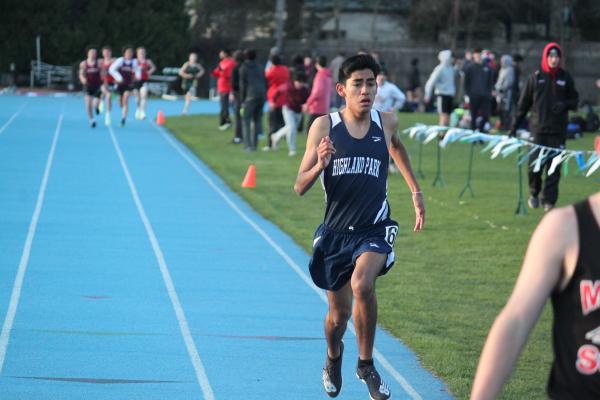 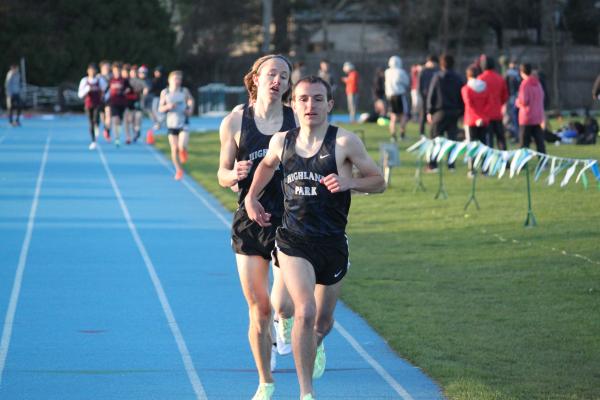 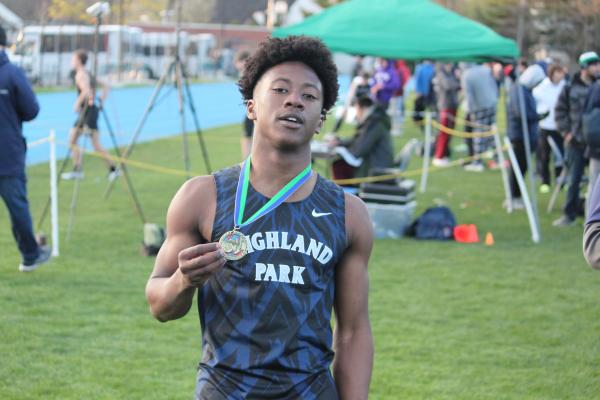 Finally, the 4X400 meter relay teams were ready to compete. Each guy racing had done at least one event before this race and for some this was their 4th event of the meet. The freshmen got a great start from Kelley in :58.6. Next, Livermore ran a :58.6 despite not cutting in from lane 4…whoops. Rodriguez ran his first sub 60 with a :59.1 and Dominguez had an impressive anchor split of :55.4. HP won the event and were only a few seconds off the freshmen meet record. The sophomores were once again going for the meet record (3:38.4, 2004) and sophomore school record (3:34.64, 1963). Anderson led off with an awesome :51.2. Goldstein split a :56.6. Wehner had a season best :55.7 and Nales anchored the relay with a :50.9 to get the team to a 3:35.74. This is a new meet record, but they just missed the HP sophomore school record. 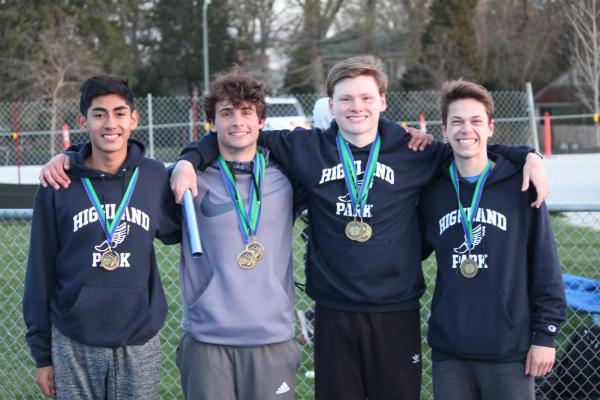 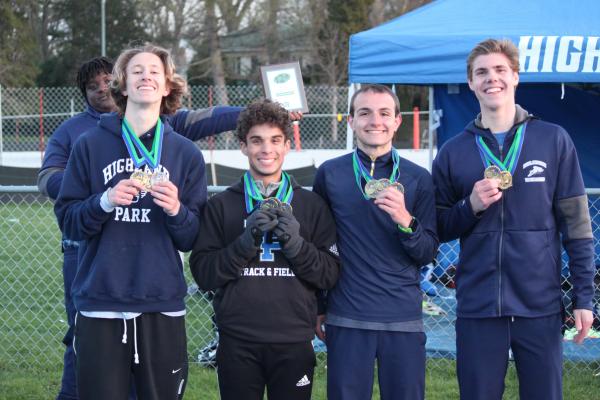 What a meet for the Giants. The freshmen took 4th place but were not that far out of 2nd place. For many of these sophomores, it was the first time competing  against their age group since many have been competing on varsity this season and some even last season. It showed, as the Giants dominated the team competition with 154 points to New Trier’s 114 points in 2nd place. The combined freshmen and sophomore scores also had HP finishing first. This was an extremely successful meet for HP…3 meet records, 1 sophomore school record, and a few more near records performances. Hopefully, this is a sign of what is to come for this team in the next few years on the varsity level. If these frosh-soph track & field athletes can continue to trust the process, put in the work, and get a few more guys to join and fill in the gaps, huge success at the varsity level lies ahead!

The nominations for Giant of the Meet included:

Giants of the Meet: