During a season filled with never before seen challenges, the Giants looked to have their best team performance at the CSL North Conference Championship hosted by Deerfield. The meet is the last time the entire team competes together before the State Series. Tremendous work and commitment has been shown by this team with many of the runners starting off their training for the season in the early summer.

The first race of the day was an Open 2 Mile. HP had just four runners in the race. They were led by sophomore Ramey Heimgartner. He took 14th place in 15:52.3 which is around a minute faster than last year at the Conference Meet. Heimgartner put in tremendous work over the summer to have a breakthrough season. 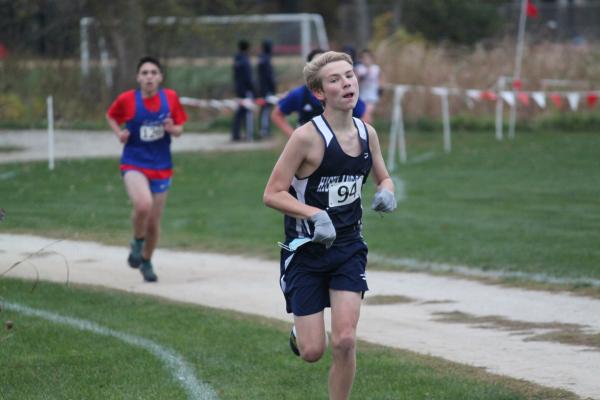 Next in was freshman Nate McDonagh with a 15:58.2. This was nearly two minutes faster than his first race of the season on the same course (17:46.3). Junior Ethan Nicolaz-Davidson finished next for the team with a season best 2 mile time of 16:36.7. Junior Marco Schulze raced in his first meet of the season and had a great race as he came through the mile near what he ran for his timed mile. Schulze ended up running even faster for his second mile by over 30 seconds to finish in 17:32.4! 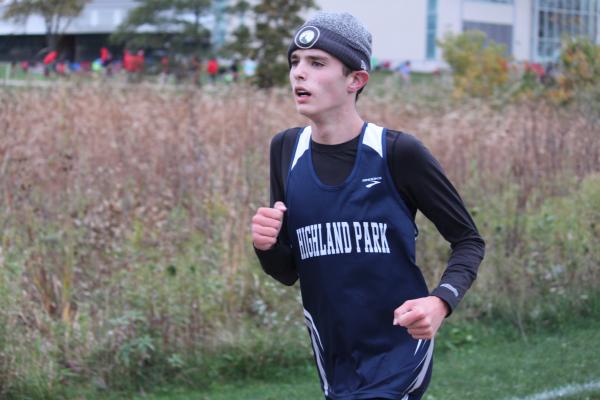 The next racers to compete were the freshmen. Lukass Nales got into good position early looking to finish in the top 5. During the last 400 he was in 5th place just after a runner from Niles North went by him. Nales refused to let him get away and sprinted back past him while gaining on the 3rd place runner from Deerfield to finish in 4th place. He ran his best time of 11:28.8, just .6 behind 3rd place. 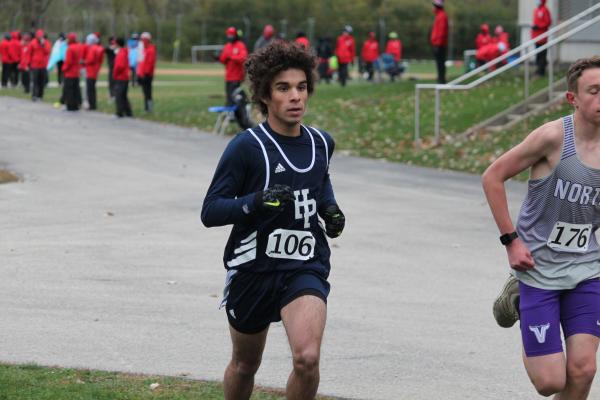 Connor Edelstein ran another great race as he just missed his personal best by a few seconds running a 13:15.3 for 15th place. Eli Neiman ran a super race with nearly a 38 second personal best finishing in and 14:02.0. 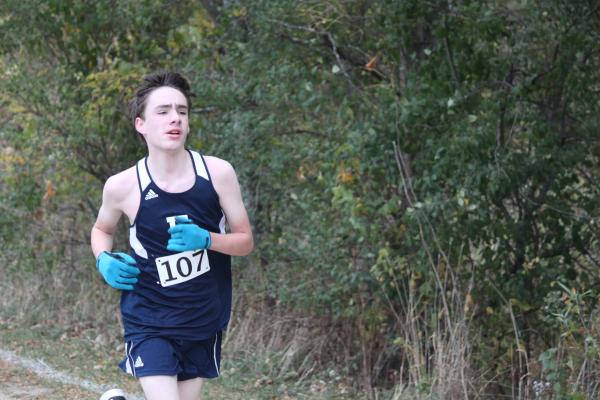 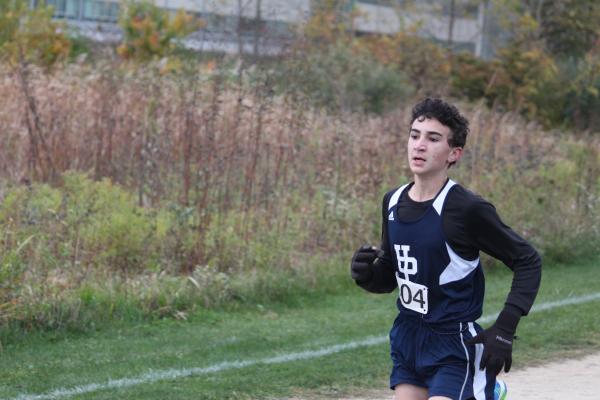 The Sophomore 3 Mile Race was the next race. The Giants squad had 3 freshmen and 3 sophomores in the race. All 6 HP runners ran personal best times! The freshmen led the way as they took 12th, 13th, and 14th. Nolan Schott had a strong final half mile to get to the line in 18:57.4 followed closely by Alex Rosen in 18:59.9. This was the first time under 19 minutes for both of these runners. 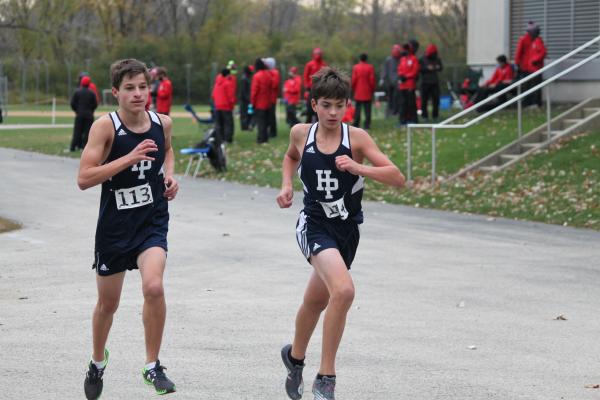 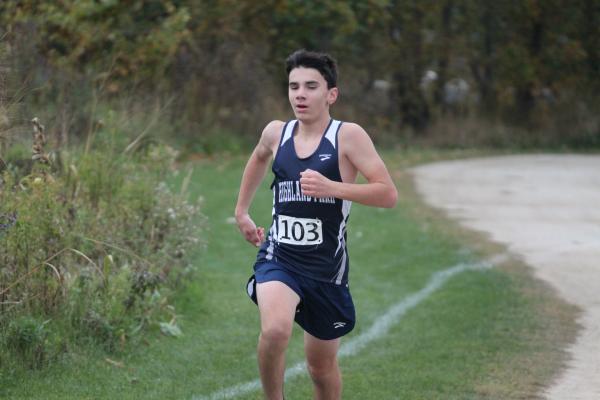 The JV 3 Mile was a race for the Giants that included 3 freshmen, 2 juniors, and 2 seniors. Senior Jason Werneth had the best race of his career. He had a solid start and then did a nice job moving up throughout the race with his 2nd mile being his fastest. Werneth ran a career best 16:44.9 to take 4th place. 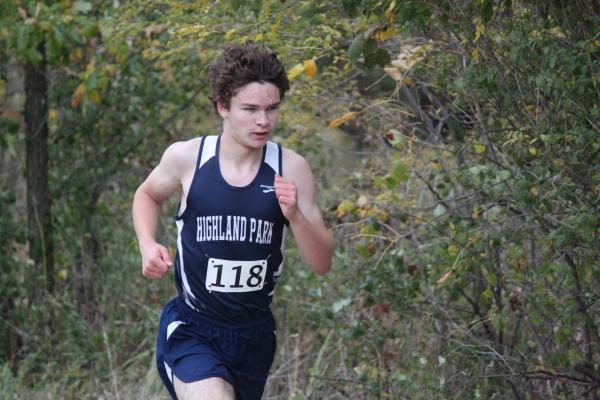 The next two runners in for HP were freshmen. Barak Goldstein had a strong race finishing just 3 seconds off his personal best to run 17.11.8 for 9th place. Doug Anderson was not far behind with a breakthrough race to take 10th place in 17:19.3. This was only his second time running under 18 minutes. 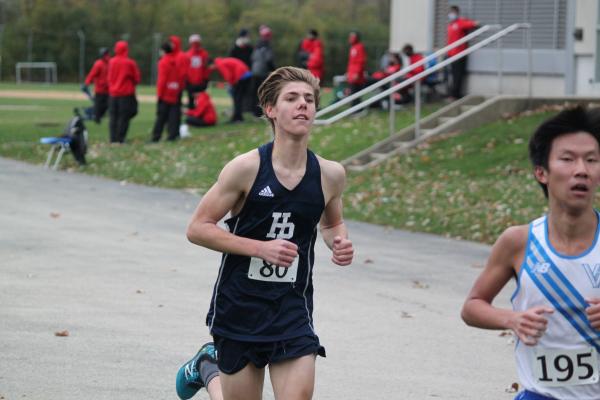 Senior Max Friedman battled tough and had a stellar final kick to finish just .3 ahead of a runner from Niles North for 12th place in 17:29.2. 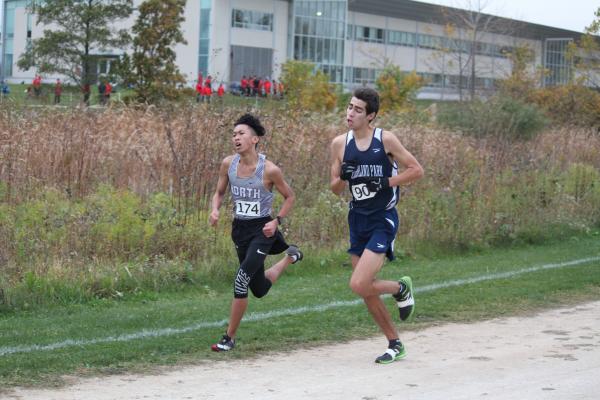 Freshman Yonatan Garfinkel had a goal of breaking 18 minutes for the race and pushed himself to do so. He ended up finishing in 17th place with a time of 17:50.8. It was fun to see the hard work paying off for so many runners. 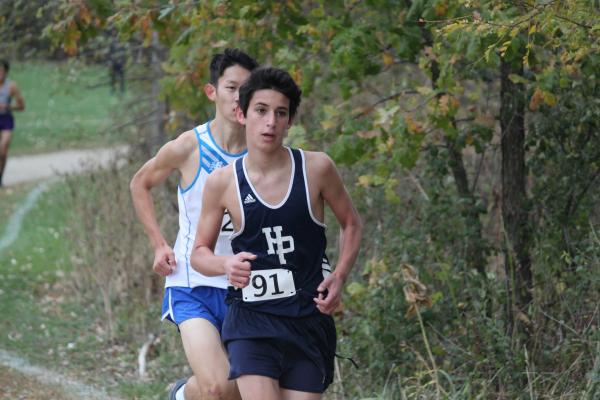 Juniors RJ Guhl and Alejandro Seiden were the next two Giants to finish. Both ran their best times of the season coming across the line in 19th and 20th place with times of 18:11.8 and 18:18.0. 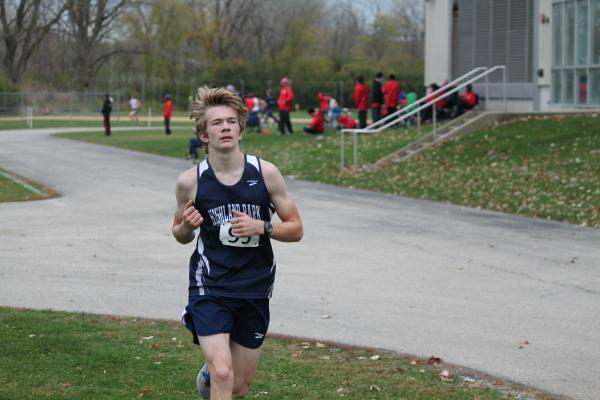 The next 3 finishers for the team were seniors. Ari Kaden used a strong last 400 to pass teammate Max Laky. Both runners had great seasons and ended with fast times. Kaden just missed his goal of breaking 19 with a time of 19:04.6 for 13th place. 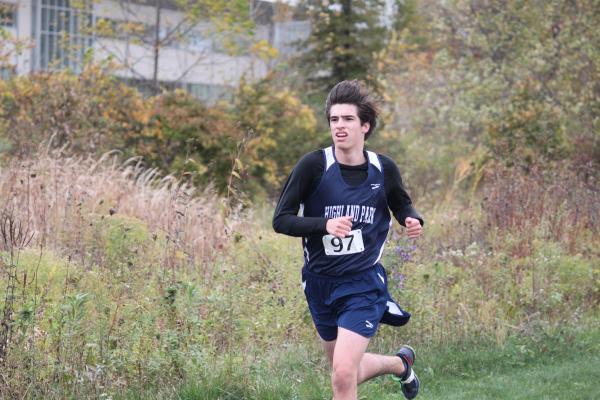 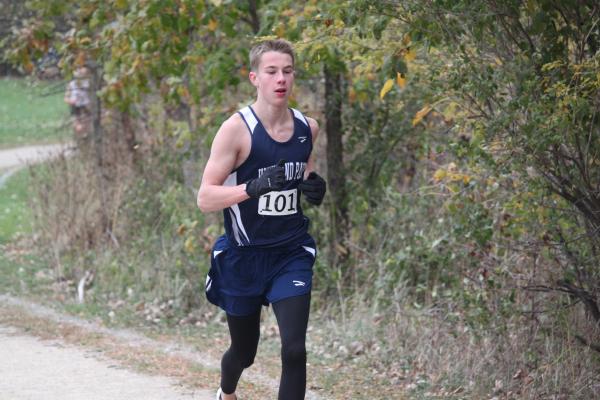 Albert Klayman used a very strong last half mile to run a 19:46.0 to just miss finishing in the top 20. 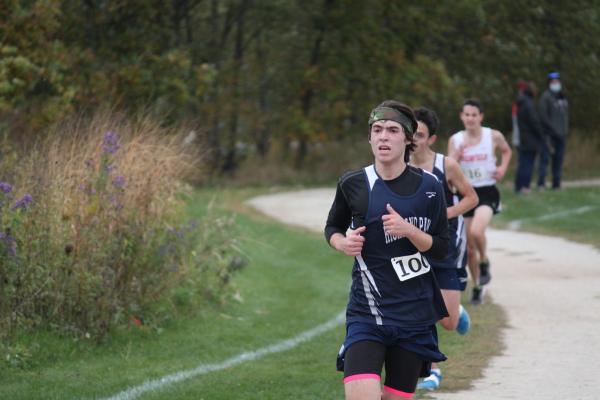 Junior Eli Leshtz ran a personal best while crossing the finish in 19:50.4. Junior Ted Zinox got out hard, but was not able to hold his pace. He still battled tough to finish in 20:02.8. Senior Alex Kelley finished his only season of cross country at HPHS with an outstanding race. He ran a personal best 20:16.3. Kelley showed tremendous growth in one season and it was a shame the team was not lucky enough to have him for more seasons. 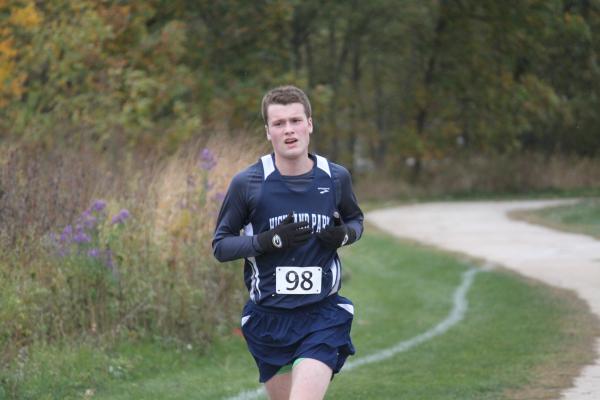 Speaking of growth in a season, junior Gabriel Ramos was another great example of that. He started the season in the 24s, then 23s, then 22s, then 21s!!!! Amazingly, in his last meet of his first cross country season, Ramos finished with a personal best time of 20:26.8. This was his best time by over a minute! 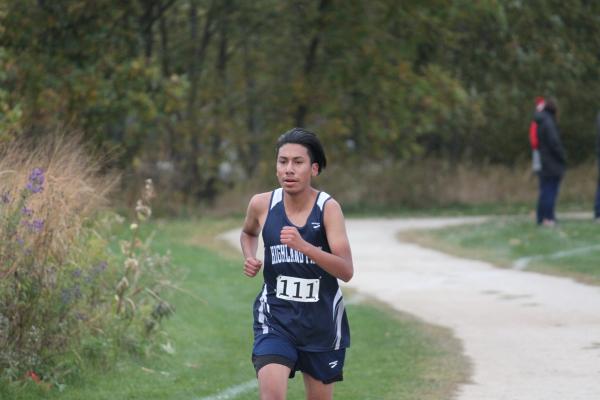 The final race of the day was the Varsity! Deerfield’s Josh Puyear went to the front with HP senior Jason Polydoris right with him. In a surprise, freshman Nate Wehner was also close behind the leaders. Eventually, the Bernstein twins from Deerfield caught the lead trio and it was a pack of 5 together after the mile. 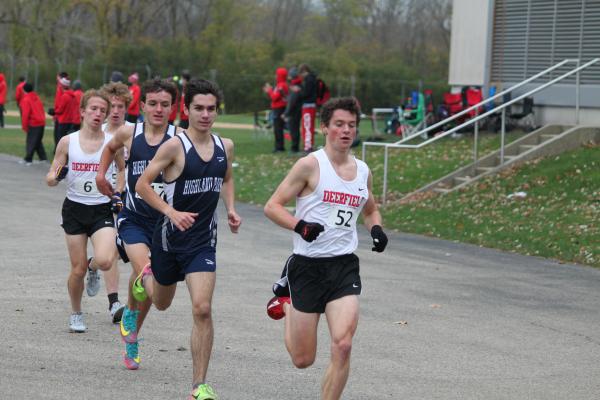 During the 2nd mile, Puyear and Polydoris started to distance themselves from the pack. Then, just after the 2 mile, Polydoris made an enormous move and quickly began to gap Puyear. When Wehner saw that Polydoris was pulling away and Puyear was fading, he set his sights on catching him. Polydoris ended up crossing the line with the easy win in 15:00.1 for back-to-back CSL North Championships. 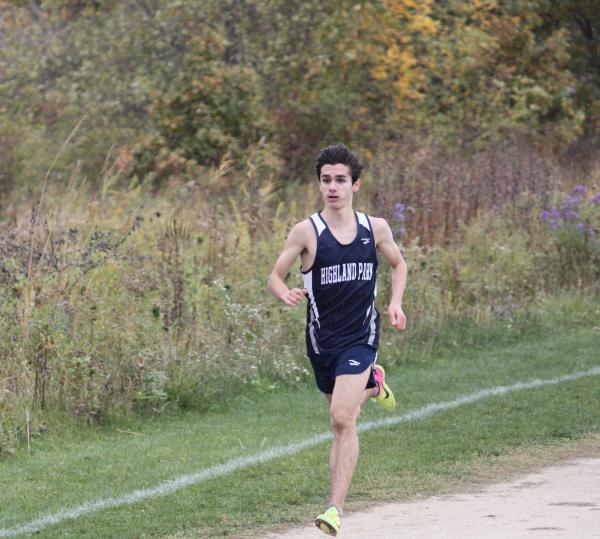 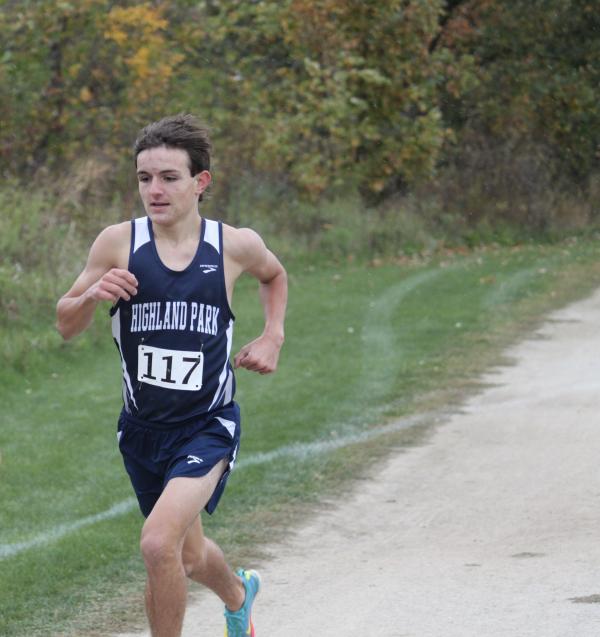 That was the best the team could ask for up front, but unfortunately the rest of the team was too far back. Sophomore Noah Jackson had a great race to run a personal best 16:18.4 for 16th place and missing All-Conference by 2 places. 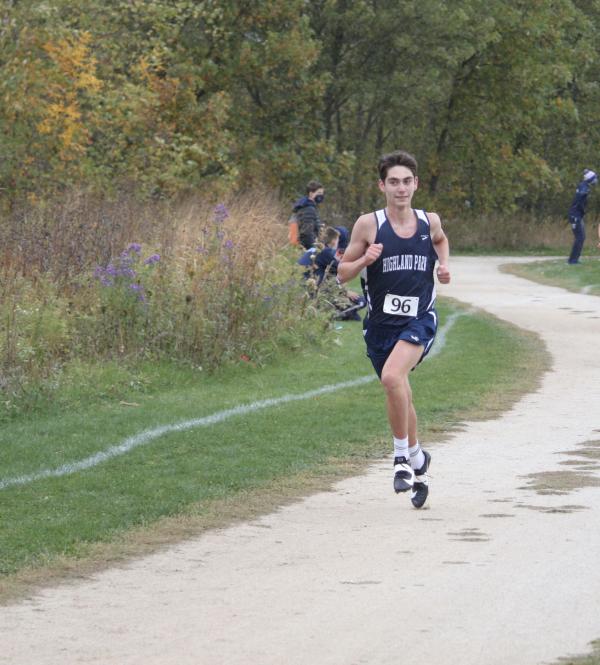 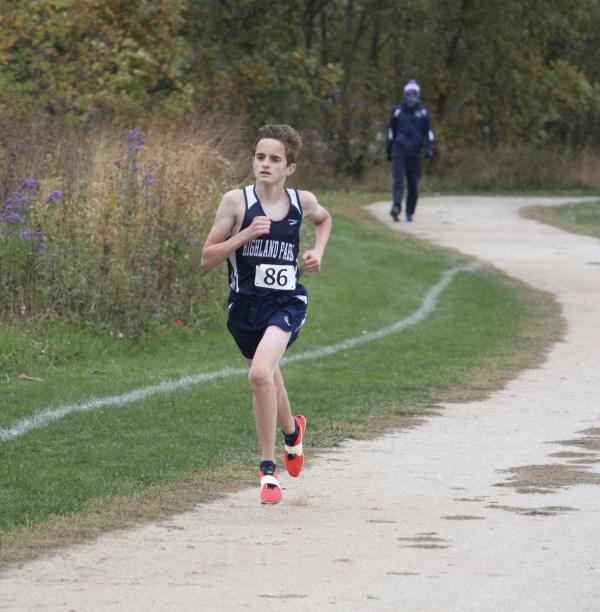 The Varsity ended up taking 2nd place to Deerfield.

Overall, this was a great meet for the Giants. Despite the windy conditions, the team ran 24 season best times with several other runners being within just a few seconds of their best times. This was a wonderful display of consistent hard work paying off. This was a season filled with challenges and changes while not being able to do many of the things that make cross country so special. The team never complained and always made a commitment to their training and to their teammates. This level of success was also not possible without the support of all of the amazing HP Cross Country families.

The top 8 will continue their season with the State Series while the rest of the team ends their season with this meet. The coaches are so thankful for everything the wonderful seniors have done for the program. Your contributions go well beyond running performances. For those returning next season, the potential is endless. The level of success will be determined by the work put in over the next 365 days by each member of the team. Freshmen, you have an opportunity to be one of the best classes in HP history. It will take each one of you making a commitment to excellence over your four years with the program. The future is bright for Highland Park Cross Country! Go Giants!