Giants Compete at First To The Finish Invite In Peoria

The Highland Park cross country team was once again able to participate in an overnight trip to Peoria for the First to the Finish Invite. They had been unable to make this trip the past two years due to COVID. It was an incredible key experience for the team. The team bonded on the trip and also got in a great race on the State Meet course at Detweiller Park. It was very hot, but many of the Giants rose to the occasion with impressive performances in both the varsity and open races.

In the varsity race, the team got out well and into positions where they were hoping to be. Some held on better than others. Junior Nate Wehner once again led the team with a 26th place finish. This was not the performance he was hoping for, but he and the coaches are confident he is capable of being one of the top runners in the state this season. He will need to continue to test himself in practices and races to reach his goals. His 3 mile time of 15:27.4 was only 8 seconds slower than last season at this meet. 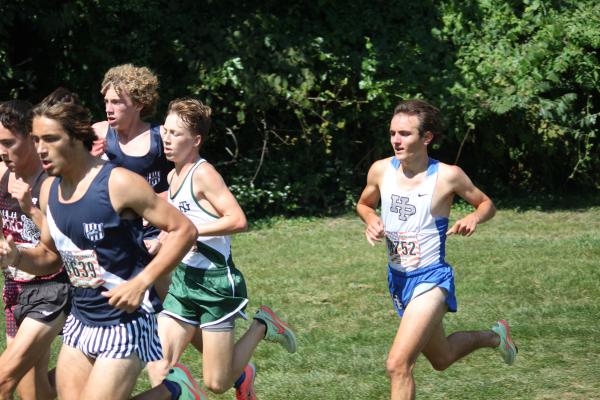 Junior Barak Goldstein was 24 seconds faster than last season on this course, but was also not racing to his capabilities in this meet. He ran a solid 16:24.3 to finish in the top 100. He will need to race with more confidence moving forward. He put in a great summer of training and is ready for a major breakthrough performance.

Senior Noah Jackson typically has a breakthrough mid-season. After being held out of the last meet due to an ankle injury, Jackson ran a 16:52.0. He will need to close the gap on Goldstein and race much faster in upcoming races. He is fit and ready to do so.

Sophomore Usiel Rodriguez keeps getting better each meet. He broke 17 minutes for the first time with a 16:54.6. Rodriguez could be a difference maker for the team as he continues to improve and show what a great racer he is. 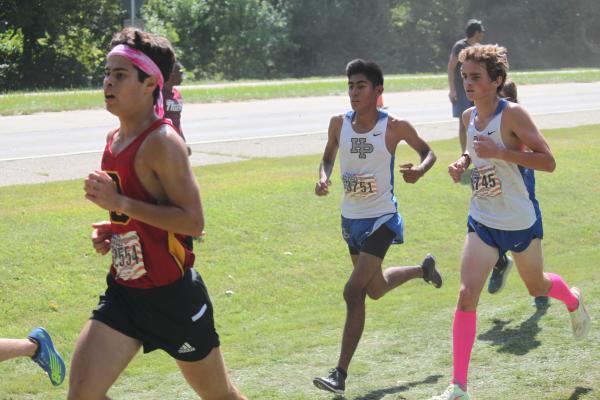 Senior Alex Bradshaw continues to show improvement after a slow start to his racing this season. This was a better performance from him as he ran 17:11.2. Eventually, he will be working his way back up closer to Jackson and Goldstein.

Junior Lukaas Nales has had an impressive start to the season. He continues to run times that are significantly faster than what he ran last season. At this meet he was 47 seconds faster than last year with a 17:16.8. Next time he is on a fast course, he should be sub 17.

Junior Zach Coren had a big 1:40 improvement from his time last year. He ran a strong 17:29.9 personal best. Coren continues to show that his hard work is paying off as he is battling for a top 7 spot. 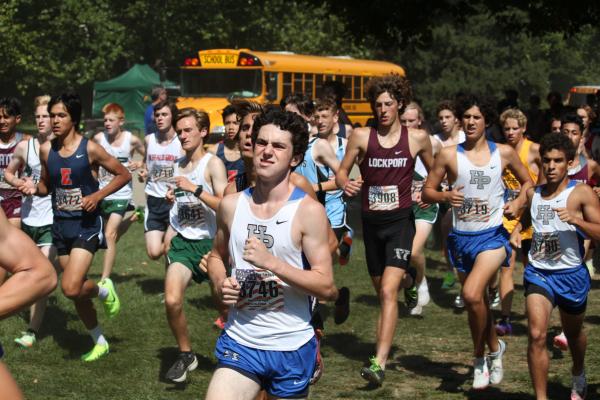 Junior newcomer Robert Oboza also continues to show tremendous improvement. He raced to a personal best 17:32.5. He continues to add quality to the depth of the team.

Junior Yonatan Garfinkel has also been showing noticeable improvement from last season. He ran 22 seconds faster this year at the meet compared to last season. His time of 17:33.1 was a personal best.

Junior Doug Anderson fell off the pack after the first mile, but held on for a 17:52.0. He was still within 8 seconds of the time he ran at this meet last year.

In the open race, the Giants had 32 runners competing! Nearly all that raced on this course last season improved their times. Several by multiple minutes. The freshmen that competed all raced in their first 3 mile race of the season. The team had many impressive performances in this race. 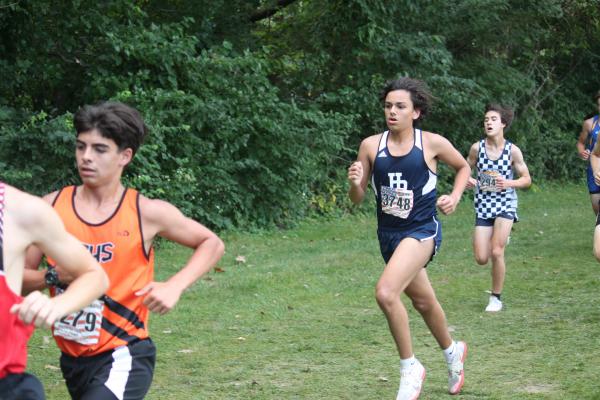 Freshman Daniel Doyle had a tremendous race as he took a risk and went out in a 6:09 first mile. He finished in a 19:08.5. He has shown that he is a tough racer. 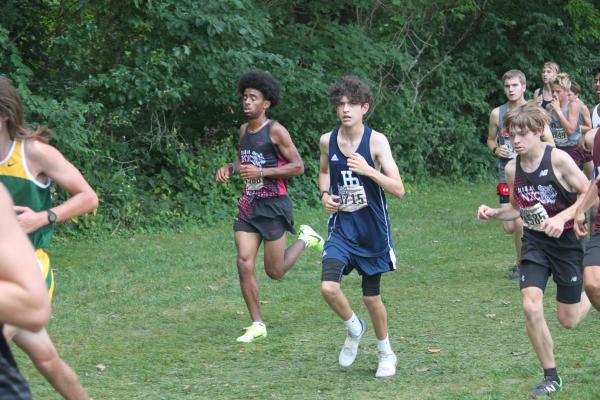 Sophomore Robby Mendoza improved his time from last year on this course by 1:10. He ran 19:46.4 for the 3 mile race. HP had a nice pack that finished just behind Mendoza. Freshman Josh Brown ran 19:48.1 for his first 3 mile race of the season. Junior Andrew Kern was just behind him in 19:50.1 despite having an off race. Senior Davide Albiani ran 1:42 faster than he did last year at this meet. He finished in 19:51.1. Freshman Henry Gamson continues to improve as he ran 19:51.3 for a solid performance for a young runner. Junior Oliver Baterdene was sub 20 minutes with a 19:54.3 to improve 1:34 from last year at Detweiller. Senior Enrique Lipezker just missed sub 20 as he ran 20:02.2. This was 1:40 faster than a year ago at this meet. 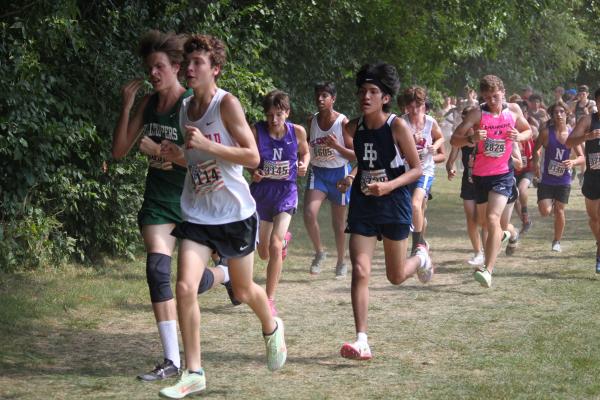 Junior Eddy Picazo and senior Andrew Arzac finished 2 seconds apart as they crossed the line in 20:47.9 and 20:49.8. This was an 11 second improvement for Picazo and a 2:50 improvement for Arzac from the previous year at this meet.

Freshman Moss Roberts ran well since returning from illness to finish in 21:03.4. Not too far behind was senior Ramey Heimgartner. He came in at 21:17.3 to be 1:14 faster than last year.

Sophomore Mateo Diaz ran a time that was 1:30 faster compared to last season. He finished in 22:02.0.

The next 3 HP finishers were all freshmen. Harvey Hayes led the way with a 22:37.4. Lowell Redmond battled to a 22:41.2 while Emmit Boxer finished in 22:46.6. This trio of freshmen will continue to improve with the hard work they have been putting in.

Junior Ryan Griffith took a risk early in the race by going out in 6:34 for the first mile. He faded a bit, but still ran an incredible 7:54 faster than last year at this meet! His time this year was 22:58.8. 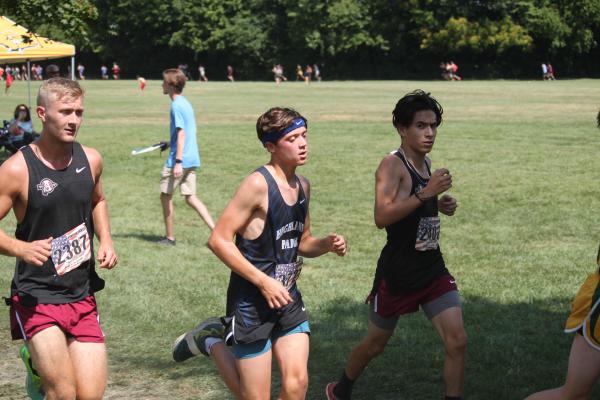 The next two finishers for the Giants were sophomores. Logan Berghoff has been battling shin issues all season, but showed his toughness as he raced to a 23:12.9. Mason Zoeller was another runner with a huge improvement in his time. He ran 6:30 faster than last year. He finished in 23:24.0. 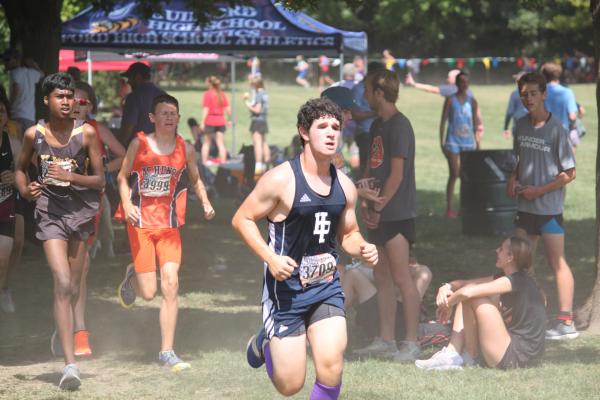 Freshmen Ethan Glovsky and Gal Raviv did well in their first 3 mile races. Glovsky ran 23:49.5 while Raviv battled to a 23:59.0 finish. Both runners have been dealing with some early season injury issues.

Freshman Noah Carson ran 26:29.1 to complete his first 3 mile race. Following him, with a strong finish, was sophomore Henry Suh. He passed several guys down the final stretch to finish in 29:56.9.

The meet was a mixed bag of performances with many great races and several sub-par races for the team. The varsity knows it needs to race better and be both physically and mentally tougher to reach their goals. If they put in the work, trust the process, and believe in themselves and each other, the team will be successful. This is a team of student-athletes with great character and a desire to be their best.